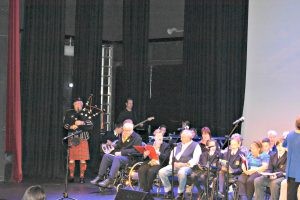 This year’s Let’s Find Our Voice concert held on Wednesday June 27 was bigger and better than ever.  Cooinda residents and FCJ College Year 7 students performed to a sell out crowd of over 340 people at the Benalla Performing Arts and Convention Centre.  This year’s concert included a ‘sneak peak’ of the new clip produced by Christine Knight, which had the audience in tears laughing, favourite songs chosen by the choir, which included bagpipes for Mull of Kintyre and the memoirs of six Cooinda residents.

We thank the Benalla Rural City for their support in hiring the BPACC auditorium and our continued partnership with FCJ College.

What an AGM to remember at Benalla Performing Arts and Convention Centre yesterday afternoon! Thank you to everyone who attended, it was

Former Board Members were acknowledged at an afternoon tea held in the Independent Retirement Living social rooms, the Hub on Thursday 22